An abyssal fish, fish of the abyss or fish of the depths is a fish that spends most of its life in the abyss. Abyssal fish are an important element of the abyssal fauna and a considerable fishery resource. Renowned for their monstrous appearance, most measure barely ten centimeters in length, rare are those that exceed one meter. Due to their difficult accessibility, we know very little about their behavior, we can only deduce it from their anatomy.

In the depths of the abyss (pit depth or bottomless pit) would live hundreds of thousands of underwater species. While many of deep sea fish still remain unknown, given the difficult observation conditions, others, on the other hand, are renowned for their physique, to say the least… frightening.

The average depth of the oceans is about 3,800 m, so the abyss constitutes more than 85% of the total volume. The high seas are therefore the largest habitat of the terrestrial biosphere, for understanding the spread of biodiversity, the study of abyssal fish is an important element.

Of 15,800 species of sea fish, it is estimated that at least 2,000 live in the abyss. Abyssal fish are divided into two types: the so-called benthic fish, which live near the bottom of the ocean, and the so-called pelagic fish, which float in the middle of the ocean, far from the bottom. Their lifestyles are very different, this distinction is important to understand the evolution of the ecology of deep-sea fish.

Gigantactis is a deep-sea fish with a dorsal fin whose first filament has become very long and is tipped with a bioluminescent photophore lure (luminous spots).

Before the end of the 19th century, scientists believed that any form of life was impossible in this hostile environment that is the abyss. In 1858, British naturalist Edward Forbes claimed, based on observations aboard a survey vessel in 1839, that there could be no life below 300 fathoms (a unit of length in the imperial and the U.S. customary systems equal to 6 feet, used especially for measuring the depth of water) (around 550 m).

The discovery of fish in the abyss is recent, but it is not new. Long before the invention of the first submersibles, the first specimens described date from the end of the 19th century with expeditions equipped with long nets to catch the abyssal fauna. From 1872 to 1876, the scientists of the Challenger expedition, the first oceanographic circumnavigation around the world, scraped the seabed using dredges and trawls. Among many other discoveries, the expedition cataloged more than 4,000 previously unknown animal species, including hundreds of fish. This expedition is the starting point of the history of the study of deep-sea fish.

But during these miraculous catches, the brutality of the decompression and the thermal change was such that the fish died quickly. Indeed, most abyssal fish are not able to survive on the surface, and attempts to keep them in captivity have all failed. For this reason, little is known about them: there are limits to the amount of fruitful research that can be done on a dead specimen, and deep-sea exploration equipment is very expensive.

Beginning of the exploration of the abyss by man

The invention of the first submersibles during the First World War for military purposes, but also academic, marks the beginning of the exploration of the abyss by man. In 1928, a bathysphere, a spherical submersible, finally made it possible to observe abyssal fish. The bathysphere has no autonomy, but can dive up to 923 m deep. But in 1948, Auguste Piccard built the first bathyscaphe, an autonomous submersible. The bathyscaphe has subsequently had many successors, it is a powerful tool for observing and collecting samples of the environment of deep-sea fish.

From the 1970s, the development of manned submersibles (Alvin, Nautile, Shinkai 6500, etc.) and the appearance of robots attached to a cable (ROV) made it possible to accumulate information on the way of life of deep-sea fish. in their natural environment. But the dazzling light of the searchlights causes a defensive or flight reaction in most abyssal fish, preventing concrete analyses.

The exploration of the abyss is still topical; many expeditions are charged each year to discover a little more. Some of them fish up to 50-90% unidentified species, especially in the southern Atlantic and on Pacific seamounts. Estimates on the number of species to be discovered in the abyss are generally around 10 and 30 million, whereas we currently know 1.4 million terrestrial and marine species. It can therefore be concluded that many species of abyssal fish are waiting to be discovered.

Fish with light on head

Anglerfish from the order of Lophiiformes, they have an enormous, large, flat, depressed head, (which covers from 1/3 to half of their body) with a wide opening, equipped with numerous sharp teeth, and a kind of fleshy appendage mobile swinging antenna present on the front side (which is called illicium) Which emanates from natural light (this phenomenon is also present in fireflies, It is called bioluminescence).

This way, the swinging can attract other fish close enough to be swallowed quickly. Many live primarily in the aphotic zone of the abyssal ocean, where water depth is such that no sunlight enters for photosynthesis, and predators possess bioluminescent lures (via bacterial symbiosis). In a constraining adaptation, Lophiiformes are greyish, dark brown or black, invisible and showing only their luminescent appendage. 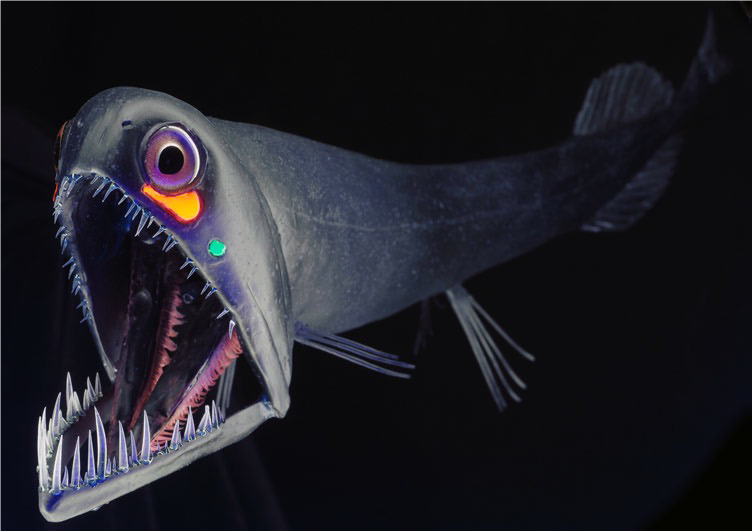 Types deep sea fish according to the depth zones

The water mass of the “deep seabed” of the oceans is subdivided into 4 depth zones:

Fish can be subdivided into three large groups:

As a general rule, demersal fishes evolving in deep waters come from groups much older from a phylogenetic point of view than pelagic species (the first demersal species already existed 80 million years ago). Most of the deep-sea demersal families are found throughout the world, but the existence of isolated deep-sea basins bounded by continents and ocean ridges leads to regional differences believed to be due to continental drift and formation. resulting oceans.

We still know very little about deep-sea fish, of which we continue to discover species, such as the largemouth shark (4.5 m long, 750 kg) and the Hexatrygon bickelli ray, which both represent new families. Since demersal species are distributed by depth, those that live on the continental slope and the continental rise are distributed over areas of band-like depths around the edges of the oceans. When deep-sea pelagic species and demersal species evolve in the same environment, there is generally predation between the two groups.

Photo credit: see above, CC BY 3.0, via Wikimedia Commons

Photo description: Gigantactis macronema is a genus of deep-sea fish of the family Gigantactinidae. The species in this genus are poorly known and found in all oceans, at depths of 1,000–2,500 metres (3,300–8,200 ft). The most striking feature of these fish is extremely enlarged first filament of dorsal fin, called the illicium, with bioluminescent photophore at its end.