In the depths of the oceans, some fish reflect so little light that they become almost invisible. How can this remarkable invisible fish adaptation be explained?

Beyond a certain depth, sunlight is extremely weak or even non-existent, but certain bioluminescent (light-emitting) organisms are light sources that can reveal the presence of an animal to its predators or prey. This obviously poses a problem: either he risks being attacked, or he is detected too quickly.

In order to circumvent the difficulty, many species of fish have developed camouflage techniques, including transparency, the mirror surface… and absorption. An American team (Duke University) has just discovered sixteen species of deep-sea fish qualified as ultra-black, in the sense that they reflect less than 0.5% of the light that hits them, some not exceeding 0, 04%. For comparison, black paper reflects 10% of the brightness. So to speak, these fish are invisible in their natural environment.

Read also: Stung by Jellyfish | What to do if you get stung by it?

How to explain this pigmentation of the invisible fish? The pigmentation of the skin of many deep-sea fish is adapted to the absorption and reflection of light, but here we see an extraordinary density of melanosomes, which literally “swallow” the light by the action of melanin. . Moreover, there is no separation between these structures, knowing that they have an optimal shape and size to prevent light reflection. Perfect camouflage, then!

The researchers believe that their discovery could contribute to the development of new ultra-black materials, with applications in astronomy (optical tools) and aerospace (satellites).

Also known as glass shrimp, this translucent crustacean is a popular pet. Its natural habitat is the brackish waters of wetlands, where it is a skilled scavenger.

This intriguing fish has barrel-shaped tubular eyes that are extremely sensitive to light and are directed upwards to detect the silhouette of potential prey. The eyes are wrapped in a transparent domed head, which allows the fish to capture maximum light. The luminous organs of this fish glow due to the presence of symbiotic bioluminescent bacteria. The two dots above the fish’s mouth that look like eyes are actually olfactory organs called nostrils (similar to human nostrils).

They are native to tropical regions, temperate waters of the Atlantic, Pacific and Indian Oceans. They live in the abyss, where they are among the only animals that can still see. 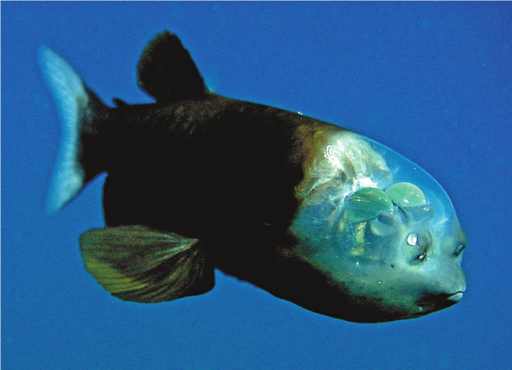 Macropinna microstoma (W.M.Chapman, 1939) is a marine fish belonging to the family Opisthoproctidae, the only representative of the genus Macropinna, it is quite similar to the fishes of the genus Opisthoproctus and like them it has tubular eyes turned upwards. In this species, however, there is a colorless hemispherical capsule which covers and protects the eyes and which can give the impression that the head is transparent: the two indentations at the anterior end of the head are not actually eyes but olfactory organs.

The eyes can be rolled forward. It has an adipose fin on the caudal peduncle. Adults are dark in color. The maximum known length is 15 cm. Kim Reisenbichler, CC BY-SA 4.0, via Wikimedia Commons

This amazing amphibian has a transparent belly allowing you to see a fully visible organ system. These nocturnal creatures are tiny (just 2 to 8 centimeters) and live in the canopies of the tropical forests of Central and South America. When they remain seated, they are extremely difficult to spot from a distance. 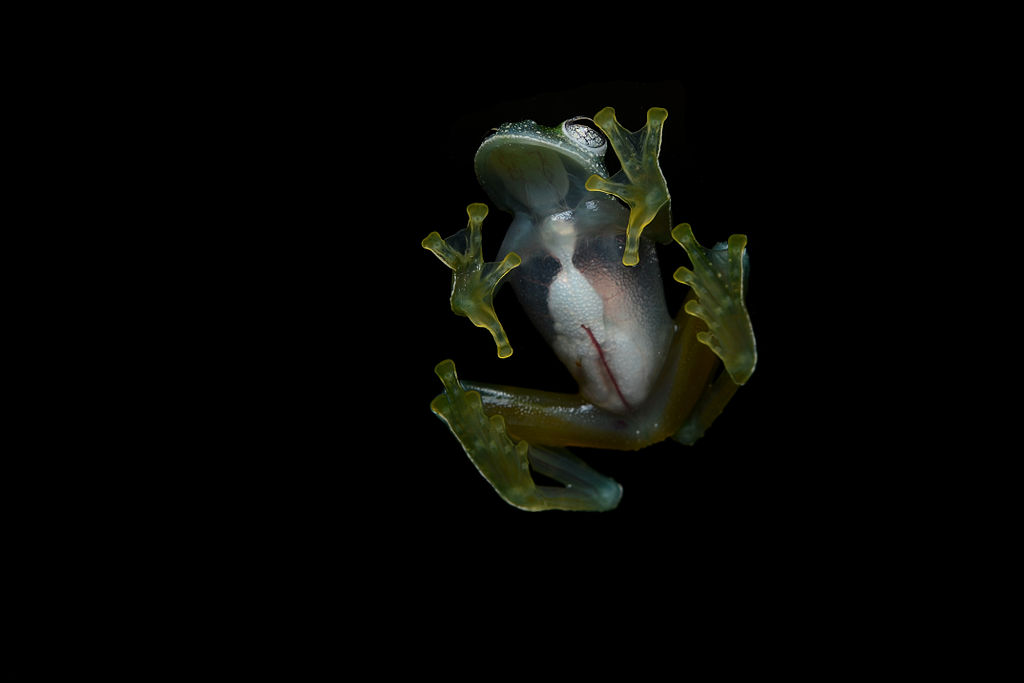 4: Crocodile Icefish (from the Channichthyidae family)

The Channichthyidae are a family of perciform fish found in the cold waters around Antarctica and southern South America. This family has eleven genera and fifteen species.

This ghostly fish has colorless blood. It is the only known vertebrate without a red blood cell or hemoglobin (the iron-rich protein that binds and transports oxygen through the circulatory system).

Salpidae are pelagic tunicate animals. They form the only family of the order of Salpida or salps. They move by contractions, pumping water through their gelatinous body and thus filtering the phytoplankton on which they feed.

Salpidae are widely distributed in equatorial, temperate and cold waters, where they can be seen at the surface, individually or in long wire-like colonies. They are also found in the Mediterranean.

The largest concentrations are found in the Antarctic Ocean where they sometimes form huge clouds.
During the last century and as krill and plankton populations declined, Salpidae seemed to multiply, suggesting that they may feed on finer particles and in particular bacteria. This phenomenon could deprive the whales of part of their food.

It is a colony of individuals of an independent species called salp, many times more developed than jellyfish and more closely related to vertebrates. Author: Lars Plougmann from London, United Kingdom, Source: Salp, influencers on the planet’s climate – P1040203, CC BY-SA 2.0, via Wikimedia Commons

This alien-looking sea creature lives 2,750 meters (9022 ft) deep at the bottom of the ocean. It crawls forward on its many tentacles at about 2 centimeters (0.78 inch) per minute while sweeping detritus-rich sediment into its mouth. 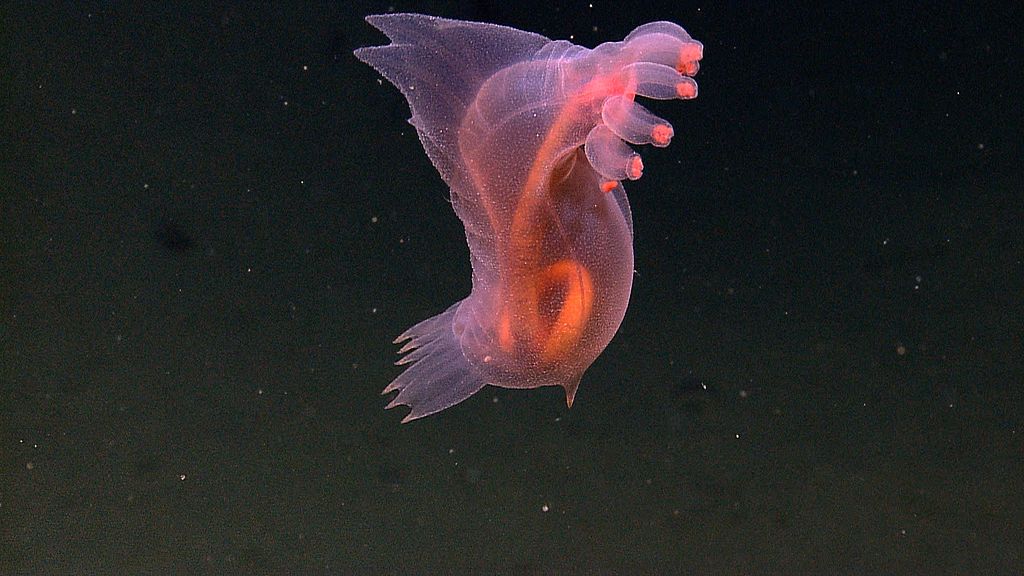 These squids spend much of their lives in partially sunny shallow waters where their transparency allows camouflage. They are characterized by a swollen body and short arms, which bear two rows of suckers or hooks.

Read also: Frilled Shark | Looks Like a Snake Rather Than a Shark

Many species are bioluminescent and have light organs on the underside of their eyes. They usually move vertically to reduce visibility, as their digestive glands can be seen through their transparent skin.

Jellyfish are found in all oceans and have roamed the waters of the planet for more than 500 million years. There are many types of transparent or translucent jellyfish. Besides imparting beauty and elegance, their transparent nature makes them dangerous to swimmers who may not see their hurtful tentacles.

Jellyfish. N i c o l a from Fiumicino (Rome), Italy, CC BY 2.0, via Wikimedia Commons

Raja Binoculata or “big skate” is often found in shallow waters. Its human “face” makes it a popular attraction in aquariums around the world. Their very pale skin reveals internal organs if you can get close enough! 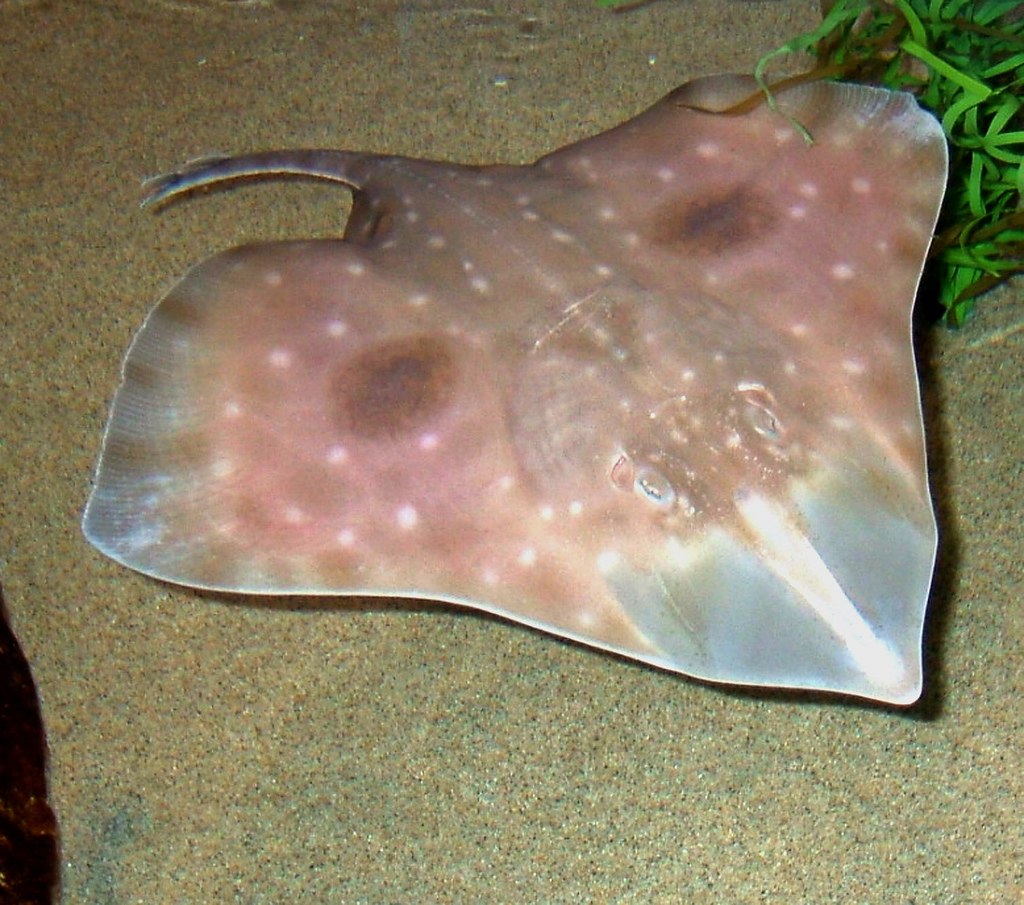 10: Phronima sedentaria, or the Sea Cooper

It is a species living in temperate, tropical and subtropical waters of all the oceans of the world, including the Mediterranean. It lives mid-water in pelagic environments, about 1 kilometer deep but can migrate to the surface. It is the sea animal that inspired the movie monster Alien, the eighth passenger.
This Invisible fish / phronima is carnivorous and feeds on zooplankton, krill and sea worms.

Discovered only a few years ago, this blue-bellied fish is only a few millimeters long. It lives in Rio Negro, the largest tributary of the Amazon, and only seems to appear at night.

These ethereal, otherworldly, translucent sea slugs soar through the col water in the Arctic Ocean. If they look familiar, it might be because they’re the real-world inspiration behind Pokémon characters Phione and Manaphy.

The transparent skin of these tadpoles allows us to see their neatly coiled intestines. And mostly spotted in Tortuguero National Park and La Selva Protected Zone as well as Caño Island Biological Reserve. Their green, translucent skin makes them virtually undetectable when resting quietly on a leaf. 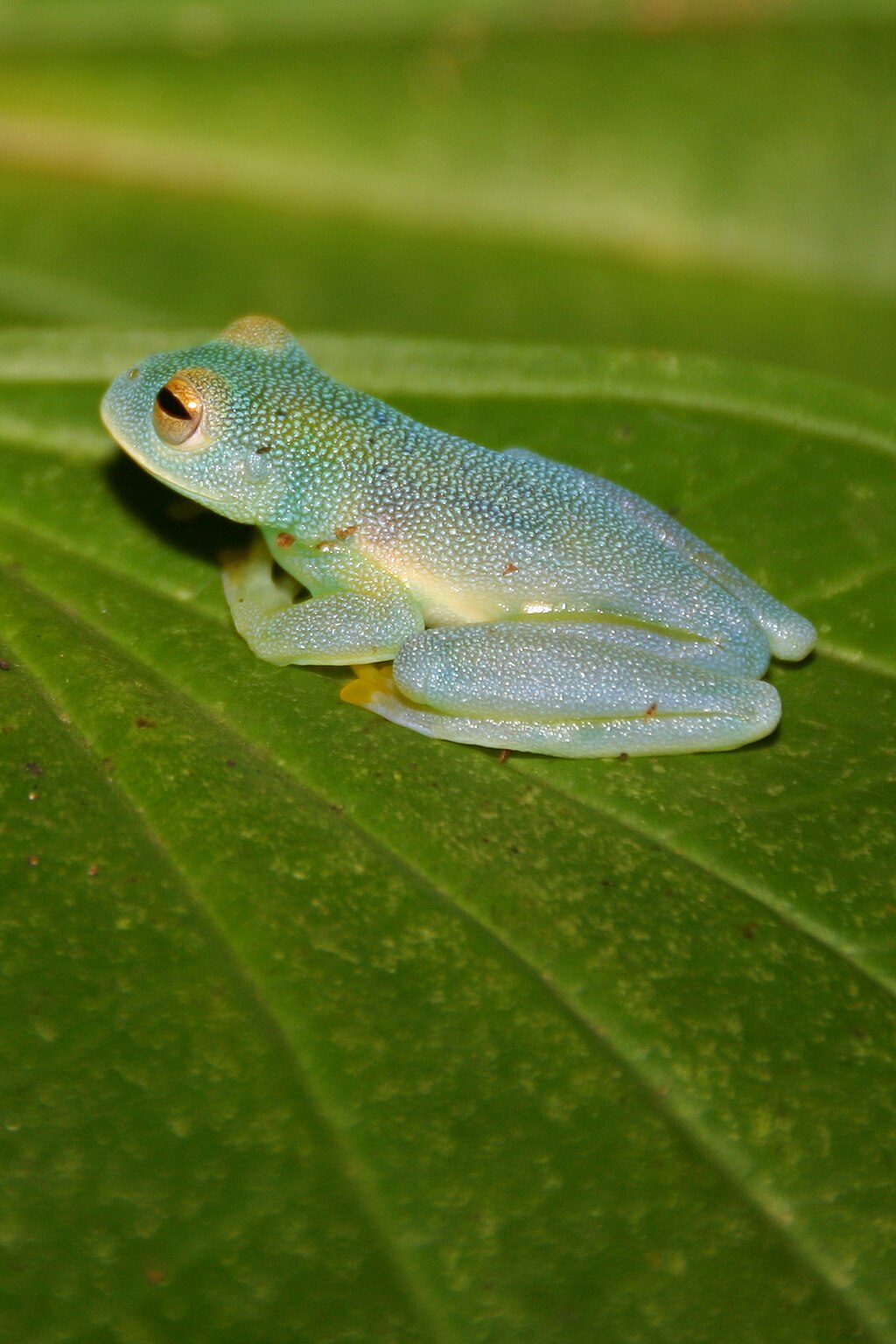 Photo of a glass frog, made in national park Manuel Antonio in Costa Rica. JurriaanH, CC BY-SA 3.0, via Wikimedia Commons

It is one of the most transparent vertebrates on the planet. Most of their organs are located near the head, and their heartbeat may even be visible. When light hits this fish, it can create an iridescent rainbow color.

They live in waterways in Thailand, Malaysia, and Indonesia. After death, they take on a rather morbid milky white color. They have a lobed body, one or two thick cells, oval in shape and transparent. These combs give off a resplendent rainbow glow when the jelly is disturbed.

This ghostly octopus is found in the deep tropical and subtropical waters of the planet. Because they are so rarely captured, either physically or on film, very little is known about them.
Unlike their opaque cousins, these octopuses have elongated eyes that appear to be pointing upwards perpetually, presumably to maximize dim light from above.

Frilled Shark | Looks Like a Snake Rather Than a Shark