Secrets and History of the Acropolis Museum in Athens, Greece Housing Ancient Treasures

The Secret of the Acropolis Museum

The Acropolis Museum is awesome. Located opposite the Acropolis site, it is a must on any visit to Athens. Obviously, people come here above all for its unique collection and the projection it offers on the hill. But what is happening under his feet is worth the detour…. it’s a little secret that you can discover as soon as you enter and which extends into the bowels of the museum!

One of the oldest areas of Athens under the Acropolis Museum

Mythical: the Acropolis Museum is built on an ancient district of Athens. Heading towards the entrance of the museum, one discovers an archaeological site that covers the period from the 5th century BC until the Byzantine period, that is to say the 12th century AD. This is one of the oldest residential areas in Athens, a secret world waiting to be discovered!

The entire site with an area of 4 000 m² (43 055 ft²) has now been developed. It is possible to visit it. Located under the museum building, we discover the daily life of the ancient Greeks with dwellings, pipe systems or even wells, “essential oil massage rooms”… It is a very dense set of ancient habitats, unique to Athens. We understand better the construction on stilts of the museum thus preserving the remains for our greatest pleasure!

The archaeological site of the museum

The entrance is via a discreet path that descends to the right of the museum. On raised metal walkways we access the site. Panels in Greek and English inform us of the original plans and urban developments over time.

The most moving place is undoubtedly the oldest house: the Θ house. It still has the characteristic floor covered with pebbles: “the banquet hall” where the men met to share a meal and wine together. Archaeologists have found three, each of which can contain seven beds or benches.

The secret of the Acropolis Museum is right there, under our feet… This district, adjoining the Acropolis, was thus a district of well-to-do Athenians, of citizens deliberating on political subjects with a cup of wine in their hands under the protection of their tutelary goddess, Athena…

We advise you to visit the museum before seeing the Acropolis itself. To better understand this sacred site, visiting the museum facilitates the understanding of this mythical hill.

Moreover, you will find all the practical information (timetables, prices, etc.) concerning the Acropolis Museum in the article below, which is dedicated to it.

The Acropolis Museum: a modern setting to house ancient treasures

The new Acropolis museum was inaugurated on June 20, 2009. This ultra-modern building made of steel, glass and gray cement is intended to be relatively neutral seen from the outside so that the container disappears in favor of the contents.

4,000 objects are collected here, of which at least 300 are true masterpieces. Everything on display comes exclusively from the Acropolis hill. Thus, you will not find in this museum any object from another part of Greece or even from another district of Athens.

On the outside square of the museum, discover under your feet the antiquities discovered during archaeological excavations. They updated one of the oldest neighborhoods of Athens. We tell you more about it in our article The secret of the Acropolis Museum.

The archaeological site, located under the museum, can now be visited:

The ground floor of the Acropolis Museum

After passing the security check, buying your tickets and leaving your bags in the cloakroom, you are ready to begin your visit to the museum. First of all, it begins with the gallery of the slopes of the Acropolis located on the ground floor.

Showcases on the sides house finds from the sanctuaries founded on the slopes of the Acropolis as well as objects that the Athenians used in daily life from all historical periods.

Be sure to look down: indeed, the transparent glass floor offers a view of the archaeological excavations. The upward slope of this glass floor symbolizes the ascent to the hill of the Acropolis.

The 1st floor: an exciting forest of statues

On the 1st floor, objects dating from the archaic period (900-480 BC) are exhibited, a period characterized by smiling statues.

Admire the graceful marble statues, the finesse of the carvings and the draperies. Stop in front of the sphinx with its enigmatic smile, the calf carrier (one of the rare male statues) as well as the graceful korê (virgins). Some statues also still bear traces of paint.

The scenography of the archaic gallery is particularly successful. Thanks to the airy presentation, we like the enhancement of objects by natural light and especially the fact that we can move freely between the statues. The latter are not aligned “in a row of onions”. On the contrary, they are arranged so that they can be seen from all four sides. 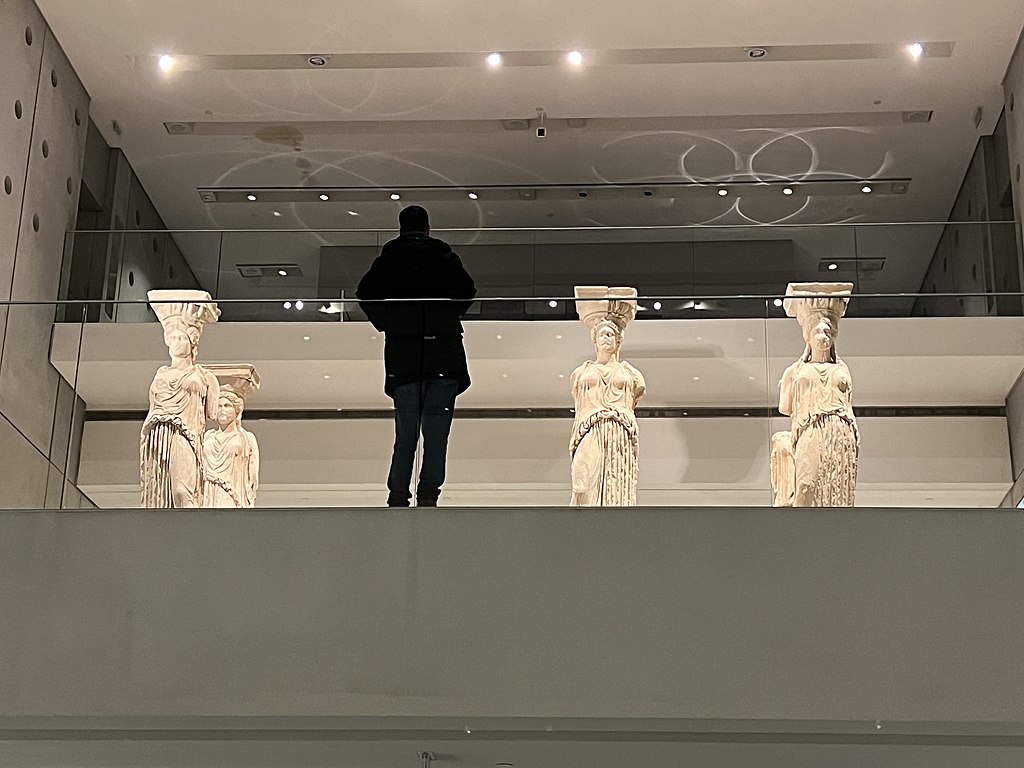 After crossing this first room, take the time to admire the five caryatids, these statues of women that supported the Erechtaion (sanctuary built on the most sacred part of the Acropolis). The real statues are exhibited here, indeed those that we see today on the Acropolis are reproductions. The sixth caryatid is in the British Museum in London. The Acropolis Museum hoping for his return to the fold, an empty place has been reserved for him.

Here again, the visitor can walk around and admire the statues by going around them. And it’s a treasure because the caryatids are as beautiful from the front as from the back, with their all different hair.

The rest of the visit to the 1st floor continues with the five caryatids. These statues represent women, and once served as columns to support the temple of the Erechtheion. These are the original sculptures, placed in the heart of the museum to prevent their degradation. These statues were six in number. One of them now resides in the British Museum in London. The Acropolis Museum is now eagerly awaiting its return and has reserved a location for it.

The top floor: the jewel of the Acropolis Museum

The third and last floor of the museum is offset from the other two in order to face the Acropolis. Through the bay windows, it also offers a breathtaking view of the Parthenon.

But above all, this floor houses the sublime gallery of the Parthenon. A spectacular room. 50 steel columns of the same dimensions as those of the famous sanctuary. And 160 meters of friezes (originals or casts) identically reproducing the proportions of the Parthenon. A striking and extremely successful mix of antique and ultra-modern!

The frescoes represent the pinnacle of ancient art. Observe the finesse and carvings and the expressions of the characters.

Of all the frieze that remains today, only 50 meters are in the Acropolis Museum. 80 meters (262 ft) are on display in the British Museum, one block in the Louvre, while other fragments are scattered in various museums. 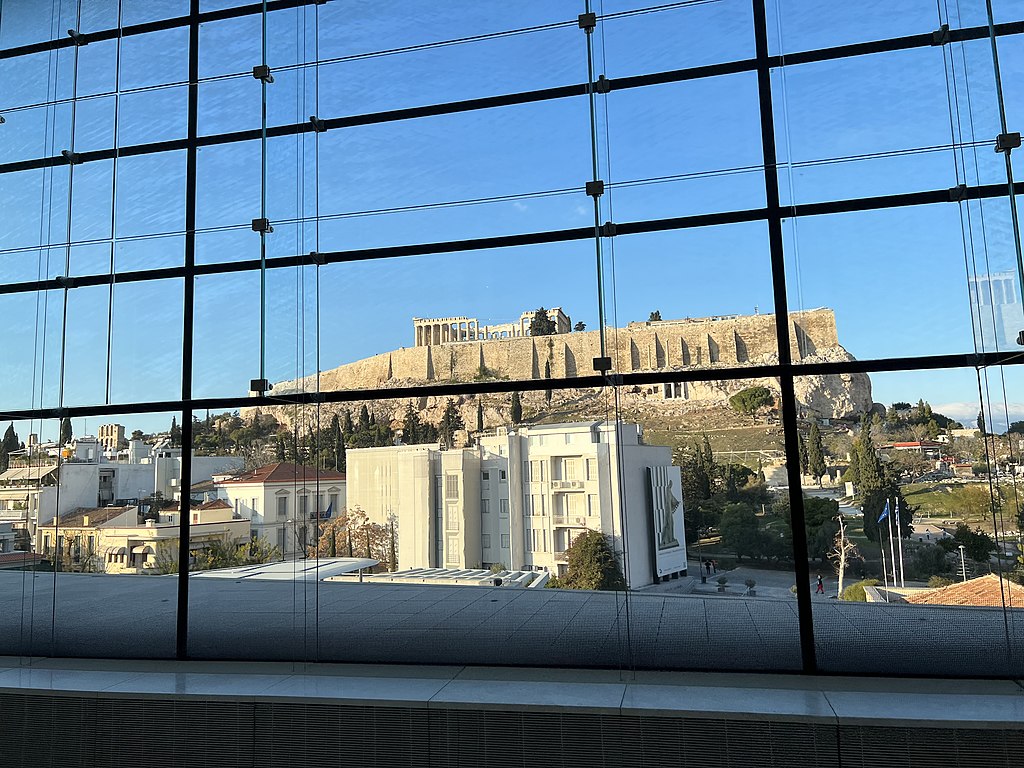 There is still a controversy over “the Parthenon marbles” today. Indeed, between 1801 and 1804, Lord Elgin, while he was British Ambassador to Constantinople, had sculptures torn from the Parthenon, with the permission of the Sultan. Then, he brought them back to his country before selling them in 1816 to the British Museum for a derisory sum.

While she was Minister of Culture, actress and singer Melina Mercouri unsuccessfully demanded the return of the friezes.

Address: How to get there?

The exact address of the Acropolis Museum is: 15 Dionysiou Areopagitou Street, Athens 11742.

The Acropolis Museum is located at the foot of the Acropolis and like the latter, it is therefore located in the city center. Therefore, it is easy to get there by public transport, or even on foot, from most central areas of Athens.

All of these stops and stations are within a 5-minute walk of the museum.