In this disease, the lung tissue stiffens by turning into fibrous tissue. This disrupts respiratory exchange. Many pulmonary fibrosis remains of unknown cause. It is also a chronic disease with a wide variety of causes. It causes abnormal scarring of lung tissue. Many diseases can cause pulmonary fibrosis, but in half of the cases the cause remains unknown.

Definition: what is pulmonary fibrosis?

During pulmonary fibrosis, the deep lung changes its structure, thickens, stiffens and becomes a scar. Through this scar, oxygen is less well transported to the bloodstream. The severity of the disease is associated with the extent of this scar as well as its rate of extension. Advanced forms of pulmonary fibrosis can lead to pulmonary hypertension as well as chronic respiratory failure requiring the supply of oxygen.

Pulmonary fibrosis reduces life expectancy. “However, the evolution is very variable between the different patients. Some fibrosis evolve only very slowly (over several years) while others are much more aggressive. Some patients have a marked evolution by exacerbations which correspond to rapid evolution of the disease which can be life-threatening in the short term.

The occurrence of each of these forms is rare. It is not a type of cancer and pulmonary fibrosis is not contagious.

Manifested by a dry cough, unusual shortness of breath, cyanosis, and deformation of the fingernails taking on a bulging appearance. On examination, the doctor hears auscultatory abnormalities: crackles which correspond to abnormal noises during inspiration. Advanced forms are accompanied by a loss of appetite and weight.

It is a change in the deep lung. These changes can be linked to autoimmune diseases (scleroderma, polyarthritis, etc.), occupational exposure (asbestos, etc.), drugs.

They can also develop into specific forms of allergy to inhaled molecules (bird feathers, etc.). Some forms are linked to genetic mutations and are therefore hereditary.

Finally, in some cases, the cause of this disease is not known. This is called idiopathic pulmonary fibrosis. Pulmonary fibrosis usually appears between the ages of 60 and 70. It affects men more than women. It is more common in patients who smoke and in patients with a family history of fibrosis.

It is currently impossible to cure pulmonary fibrosis

The diagnosis of this disease can be done by a chest X-ray. The scanner of the lungs is the examination which will, in the majority of cases, confirm the existence of fibrosis. In case of doubt, a lung biopsy can be performed (during surgery or during a bronchial fibroscopy).

When the diagnosis of fibrosis is suspected, numerous examinations will frequently be carried out to determine the cause: blood test in search of autoimmune diseases, bronchial fibroscopy and sometimes, genetic analysis. Finally, the severity of the disease will be assessed by carrying out breath tests, walking tests and blood gas tests.

Read also: Infarction is necrosis (death of a tissue) due to alteration of the blood flow | By Localization and General explanation

The evolution of this disease is variable depending on the causes of the fibrosis. The 2-year mortality of forms of idiopathic pulmonary fibrosis is estimated at less than 15%. For the other forms of fibrosis, the evolution is generally associated with that of the disease causing the fibrosis.

When fibrosis is linked to exposure to a drug or to “allergenic” molecules, the evolution generally stops when the exposure stops.

For all the causes of fibrosis, the evolution of the disease will be marked by increased shortness of breath and, from a certain stage, a need to receive long-term oxygen.

Read also: Oximeter | How does it work? What is Normal Range of Blood Oxygen Level?

Can it be cured?

It is currently impossible to cure this disease. Pulmonary fibrosis is an irreversible scar. It requires specialized care by a pulmonologist who will coordinate the assessment and the care. And to specify the objectives of the support:

What treatment is offered for this disease? 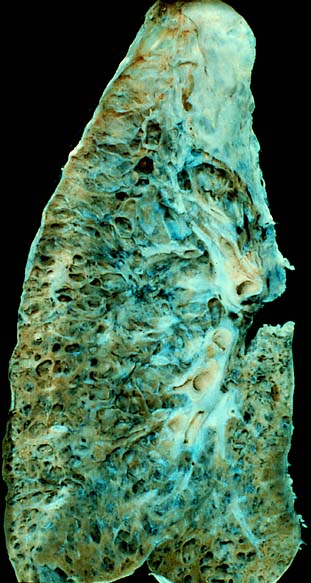 Lung with end-stage pulmonary fibrosis at autopsy. End-stage interstitial lung disease describes a large group of disorders, most of which cause progressive scarring of lung tissue. The scarring associated with interstitial lung disease eventually affects the ability to breathe and get enough oxygen into the bloodstream. See page for author, Public domain, via Wikimedia Commons

What is Idiopathic Pulmonary Fibrosis: Definition, Symptoms and Diagnosis

It is a chronic, progressive and irreversible disease of unknown origin (idiopathic).

It is a serious disease, with inter-individual differences in its evolution: in a minority the disease can remain stable over a period of variable duration; in other people, the disease will get worse very quickly.

Information: Cleverly Smart is not a substitute for a doctor. Always consult a doctor to treat your health condition.

Earth and Space Health and Medicine

Effects of nuclear explosions on human health (Intentionally or Accidentally)

International Business Expansion | Read this before your enterprise goes overseas

Economic Growth | How is it calculated?