The vegetation in Bali is incredibly dense! From tropical flowers to huge plants, there’s something for everyone. Typical beautiful flowers in Bali: frangipani, hibiscus, marigold, heliconia…

The flowers are very present in the decoration in particular in that of the temples, in that of the statues or in that of all other monuments. They are also used as offerings during religious ceremonies.

Bali has its own emblematic flower: that of the frangipani which is called here “Jepun” or “Kamboja” it projects a vision of mysticism, ancient traditions and rituals. The frangipani flower evokes the inner romance of the island, often described as magical Bali. A flower with an intoxicating smell greatly appreciated but also widely used by the Balinese in their daily lives.

The Balinese are very fond of flowers which are like an entity of nature that has a specific strength. In Hindu ceremonies in Bali the frangipani flower is always used.

This flower has 2 important roles in our religion: it is a symbol of the god Shiva and is also a means to pray, it is part of the offering.

The frangipani flower is used to indicate the purity of the heart when praying Sang Hyang Widi Wasa and its sacred light but also the ancestors. In addition to the frangipani flowers other flowers are used in our prayers, their color are as follows:

We very often find frangipani trees next to temples or houses because in this way we can use frangipani flowers at any time to pray or put them in offerings.

According to Hindu philosophy the frangipani flower when it is the fourth full moon which is a good month. This tree is considered “Sari Alam”: something that can bring enlightenment and goodness.

The hibiscus flower is dedicated to Ganesha, Shiva and the goddess Kali. White flowers express elegance, purity, refinement and perfection.

The offering of its flowers is effective when one makes the “archana”, that is to say when one offers the flowers while reciting the mantras or the sacred formulas. They are supposed to make the mantras effective and to obtain the siddhis, occult powers. Hibiscus flower decoctions help purify the blood and the heart. They improve the quality of skin and hair. They are effective in problems of excessive bleeding during menstruation, it is said.

Hibiscus flower decoctions help purify the blood and the heart. They improve the quality of skin and hair. They are used to treat excessive bleeding problems during menstruation.

This beautiful flower that is the lotus for you can only represent beauty but for us Balinese it has several meanings that we will explain to you, one of which is very important…

In Sangskrit the word for lotus is Padma. So if one day in Bali you read the name of a street: Jalan Padma (there is one in Legian) you will know that it means Lotus Street.

Very often the Hindu, Buddhist, Chinese goddesses are represented seated on a lotus (The Hindu goddess of knowledge for example: Saraswati). Moreover, if you visit the Saraswati temple in Ubud you will be in awe of the beauty of the place thanks to all the lotuses there, it is no coincidence given the link between Saraswati and the lotus. Lakshmi, goddess of luck and prosperity is the wife of Vishnu. She is also often represented seated on a lotus, her traditional symbol. But in fact visually almost all Hindu gods and goddesses are represented with a lotus which serves as their seat to highlight their purity and divine status. But more than anything the lotus is the symbol of beauty, prosperity and fertility. According to Hinduism in every human there is the sacred spirit of the lotus. It also represents eternity, purity and divinity as you will have understood.

The lotus has a close relationship with Balinese culture. Balinese scripture Danghyang Dwijendra indicates Bali as Danghyang Dwijendra: “lotus flower” of the Earth. The lotus flower is the “king” of all flowers and is mentioned in many stories. Many Balinese temples contain many structures and the most important is the Padmasana or lotus throne. The Padmasana is a large stone-hewn tower, with an empty stone seat or lotus throne which is reserved for Sanghyang Widi Wasa (the supreme god).

The Padmasana is located so that it faces away from the sacred mountain: Mount Agung. In South Bali the Padmasana is located in the northeast corner of the temple while in North Bali it is located in the southeast corner of the temple. The throne in general is 2 meters high and is thus above the heads of the faithful. In much larger versions of Padmasana there are even steps leading up to the throne so that people can place offerings there. The entire structure symbolizes the entire cosmos from the underworld to heaven. Around the base there are representations such as mountains to indicate the physical world of man.

In general here is what the colors of the lotus mean:

– the white and pink lotus: purity and devotion.
– red/purple/blue lotus: have a spiritual meaning in the sense of ascension or recognition.
– a green lotus flower is a great gift for someone trying to improve their life and start good habits.
The lotus is above all symbolic for the ancient and modern world who celebrate beauty in art and in religion which have a strong cultural connection with Bali. So what are you waiting for to plant your own lotus?

The meanings of the bird of paradise flower are multiple:

This flower plant is native to tropical regions of America (Brazil, Peru, Central America), it is grown elsewhere as an ornamental plant. And it is one of the typical beautiful flowers in Bali. Jasmine flowers are, as we have seen, offered during pujas or Hindu ceremonies, because of their white color and their fragrance. These are called sattwika flowers. They increase pure love and compassion.

They are said to influence the psyche of humans and make the mind receptive; they help to receive and radiate the vibrations of the mantras. They combine well with sandalwood paste in most cases. It is the floral symbol of ideal love!

Bougainvillea, named after the famous navigator

These shrubs with sumptuous colored bracts were brought back to Europe in the 18th century by the famous navigator Louis-Antoine de Bougainville. This is a symbol of passion, welcome and peace.

Bougainvillea in Nusa Lembongan. Shura from Amsterdam, Netherlands, CC BY 2.0, via Wikimedia Commons

Marigolds were discovered by the Spaniards in Mexico and it was the Portuguese who brought them to India and then to Indonesia.

Marigolds are considered a religious symbol for Hindus who use them as offerings to gods and goddesses in the form of a simple flower or garland. And this is typical beautiful flowers in Bali.

Before entering a temple, stalls allow you to choose flowers or garlands to make an offering. In the homes of Brahmins, Marigolds are used every day in the family temple for the performance of puja, the ritual ceremony to the gods. 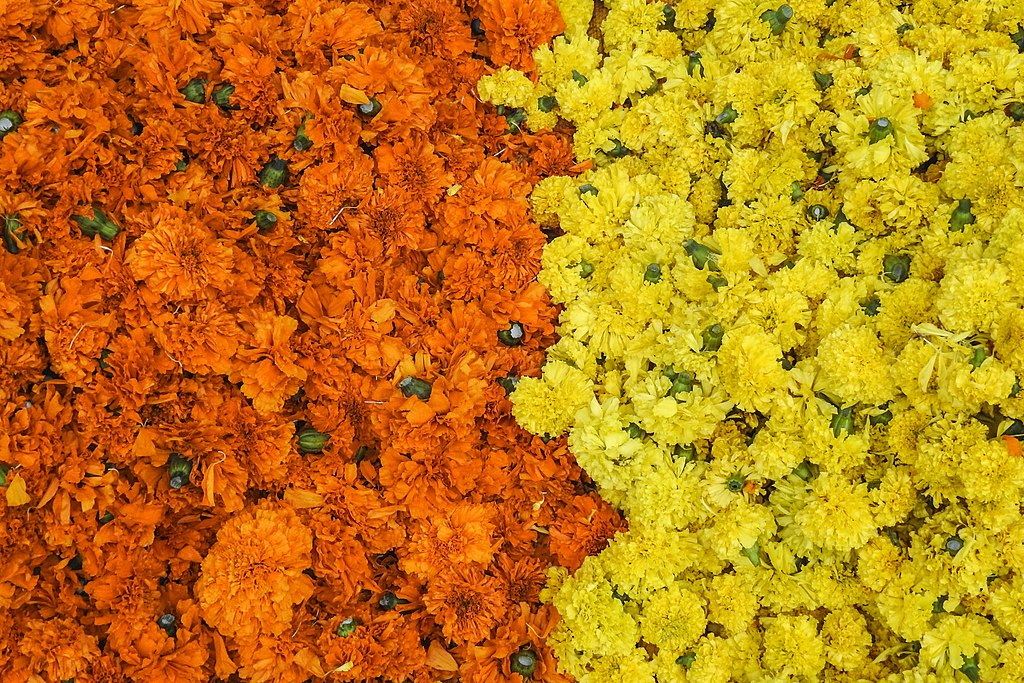 Heliconia is one of typical Beautiful Flowers in Bali

Heliconia is on of the typical beautiful flowers in Bali. It is native to Central and South America as well as a few South Pacific islands and was not first described until 1786. This attractive plant is now cultivated in all tropical regions of the world. However, there are 200 varieties, so he is not that alone!

The plant takes its name from the Greek mountain Helikon, on which the Muses stood. The inhabitants of this mountain always remained fresh, beautiful and young. Mount Helicon is in Boeotia, central Greece. So, if you always want to stay young and beautiful, it is essential to buy a Heliconia. And why not several, to be sure of the result.

It is one of the prettiest exotic flowers, it is native to Colombia and Ecuador, and is characterized by its pink color and a distinctive peak of yellow starting from the center of the flower, but also by its large reddish leaves. And Anthurium sends a message of hospitality.

If you want to find exotic flowers that will make a splash for your wedding ceremony, you will not go wrong by choosing anthuriums and your guests will remember them! 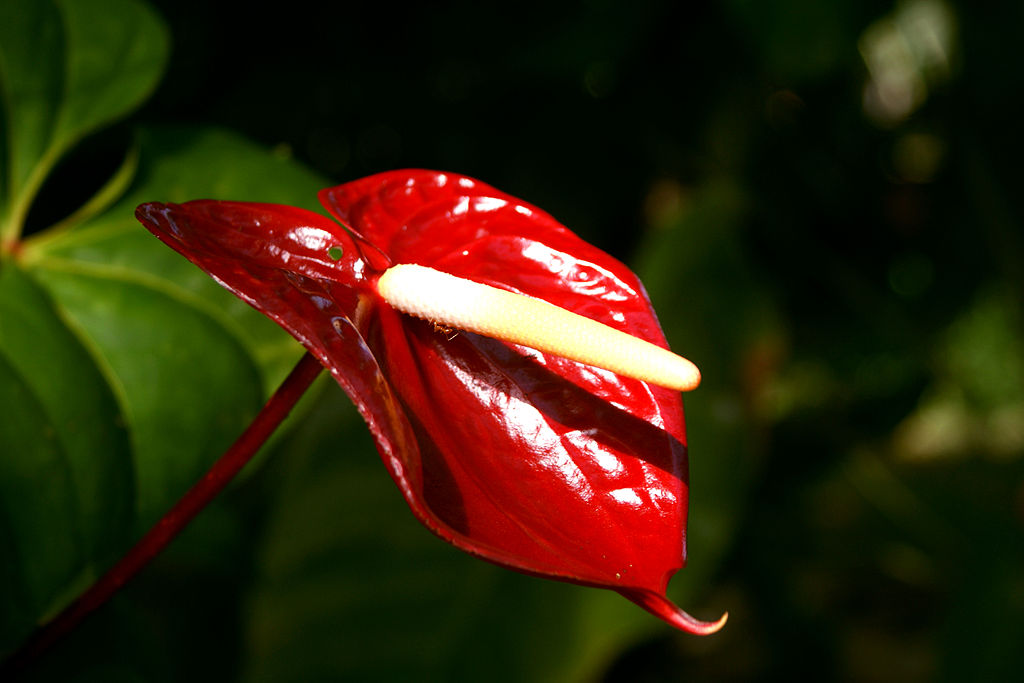 Frilled Shark | Looks Like a Snake Rather Than a Shark