The main attraction of Komodo National Park is the presence of an ancient giant reptile, the Komodo dragon (Varanus komodoensis), but its authenticity and natural characteristics, especially the underwater panorama of the Savanna and Panorama, are a potential supporting attraction. Marine tourism, for example, fishing, snorkeling, diving, canoeing, canoeing. While on land, the potential for natural tourism that can be done is animal observation, hiking, and camping. Visiting Komodo National Park and enjoying the beautiful natural scenery is an experience that will never be forgotten.

You can only visit Komodo National Park with an official guide and park ranger. So you need to book a tour operator who will arrange inter-island boat trips, guides and also to handle the costs of this national park.

Come and visit the Indonesian Jurassic Park (Komodo National Park) to admire the famous dragons (giant lizards, really impressive!) roaming the island. This park is home to the species closest to the dinosaur.

After venturing among these legendary dragons, head to the famous Pink Beach of the Komodo Islands, another wonder of nature! The pink sand contrasting with the clear blue sea water is of unparalleled beauty; it is indeed a rare sight that will make you feel in paradise.

If you want to be sure to meet the famous Komodo dragons in their natural environment, do not hesitate to start your excursion on Rinca Island because the chances of meeting them here are more promising than on the other surrounding islands!

Adventurers embarking on this journey must cross by boat for one hour from Labuan Bajo. Upon arrival, you may be lucky enough to spot a Komodo dragon or two basking in the sun.

Locals say that the population of Komodo dragons is larger here than on Komodo Island. However, the dragons here tend to be aggressive and feral, so always remember to keep your distance and be alert at all times.

In addition to its famous dragons, the island of Rinca is also known for its many hikes and treks. Enjoy a magnificent panorama while you visit the island! Vast savannahs, majestic hills, turquoise waters and a stunning coastline will leave you speechless.

An essential stop on your excursion to the Komodo Islands: Padar Island! It is here that you can enjoy panoramic views of majestic green hills, azure waters and a spectacular stretch of white sand beach.

Padar Island is considered one of the must-see places in a lifetime. Make sure your phone memory has enough storage and your digital camera has an extra memory card, because you’ll walk away with tons of photos of the beautiful scenery! 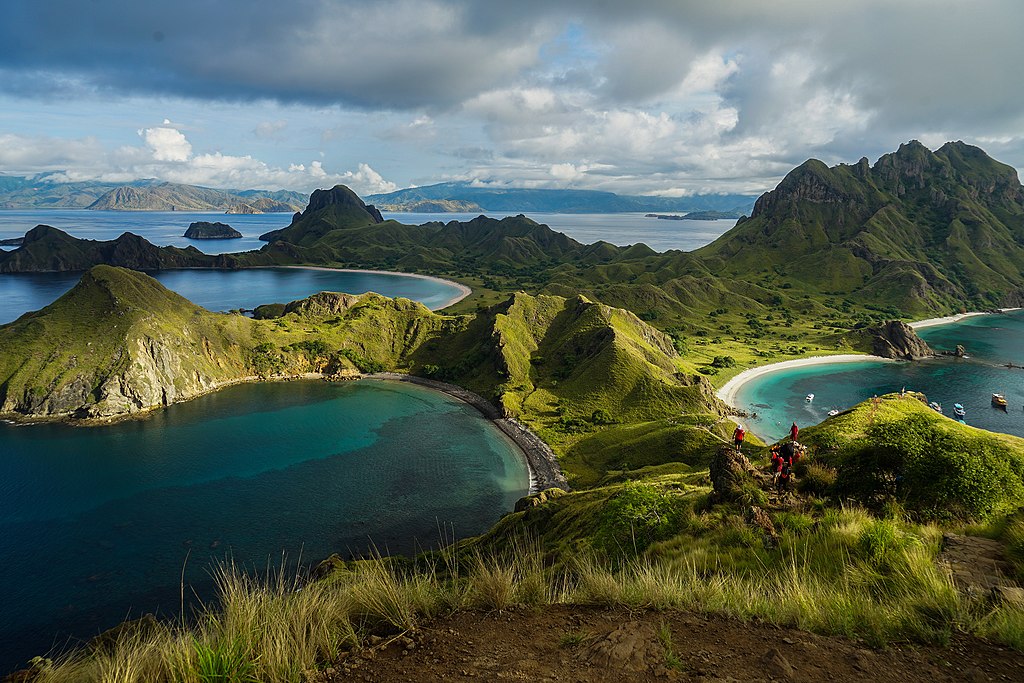 Padar Island is one of several islands scattered in the Komodo National Park area, this island has a shape with several bays, white and reddish beaches and several beautiful hilltops. YUS JULIADI, CC BY-SA 4.0, via Wikimedia Commons

Cruise to the Komodo Island

How to choose your boat for the Komodos?

Finding a multi-day cruise on the Komodos Islands for a price that was not completely crazy turned out to be very difficult. I felt like I had only the choice between:

How to Go to Komodo Island

You can fly to Labuan Bajo Airport (also known as Komodo Airport) from Bali and Jakarta with Garuda Indonesia, Lion Air, Batik and Nam Air (check SkyScanner for the latest offers) – with several other routes offering connecting flights.

There is no way you can travel to Komodo entirely by road but there is a road bus journey from Bali to Komodo which includes three ferry crossings, namely to Lombok from Bali, to Sumbawa from Lombok, and to Labuan Bajo from Sumbawa.

The last part of the trip, from Labuan Bajo (or Maumere) to Komodo can only be by ferry. The boat trip from Labuan Bajo to Komodo takes about 3 to 4 hours. Such a port does not yet exist on Komodo Island. Tourists have to get off the boat and switch to a smaller boat that will take them to the island.

NB: Prices and opening hours of attractions are subject to change without prior notice.