Electrocuted | Cause, How to react to electric shock? 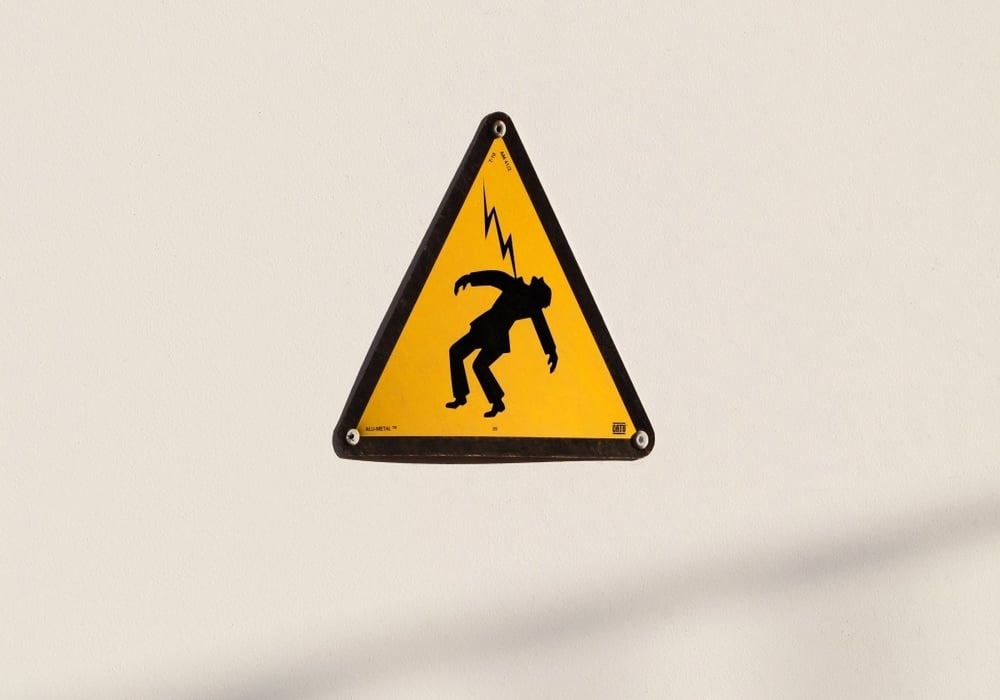 Electrocuted | How to react to electric shock?

Many incidents of electric shock or electrocuted may occur in familiar surroundings. It is important to take the necessary precautions to prevent these injuries, which can be serious, and to know the first steps to take in order to provide adequate assistance to a victim of an electrocution.

Electrocuted is a phenomenon which designates the passage of electricity in the body. The body mainly made up of water, the body is an excellent conductor for electric current. When electricity passes through it, injuries can be caused to external and internal tissues, as well as organs.

There is, in fact, a danger when the current is greater than 5 MA (milliamperes). All electrical installations and connected devices must therefore be handled with care.

What are the signs?

– Injury where the current entered the skin and the current left the victim’s body;
– Respiratory problems;
– Heart problems ;
– Burns;
– State of shock.

Actions to be taken

– Call for help;
– Cut the power;
– If you have to separate the victim from the current source, use an object that does not conduct electricity, such as wood, rubber or plastic;
– Make sure there is no water on the floor;
– Assess the victim’s vital signs.

It is important to recognize where the current entry and exit points are as this allows an assessment of the victim’s condition. If the current entered the left hand and came out of the left shoulder, there is little chance that it has passed through the heart. Cardiac arrest can therefore be more easily ruled out.

On the other hand, if the current has entered the left arm and exited the right arm, the heart is more likely to be affected by the current. The risk of heart failure is then higher.

What to do in the event of an electrical accident?

1. Protect yourself, because the victim may be under tension.

2. In case of low voltage (whichever is faster and safer): move the victim away from the electrical circuit using a non-conductive object (broom, wooden slat, etc.), remove him from the danger zone or interrupt the flow of current (unplug the plug or remove the fuse).

3. In case of high voltage: stay clear and call an ambulance. As long as electricity is flowing, it can be fatal to get close to it!

4. If there is loss of consciousness, dizziness, chest pain or palpitations: call an ambulance.

5. Control breathing and pulse. In case of cardiac or respiratory arrest, perform mouth-to-mouth and cardiac massages immediately and until the ambulance arrives.

6. If there are no such symptoms: treat any burns and take the victim to hospital.

7. In the event of consequential injuries (eg fractures or contusions): take measures and consult a doctor.

The causes of electrification

Electrical burns caused by electrification are numerous to be recorded each year. The causes are variable and accidents can occur:

At home, we talk about domestic accidents;
In the context of leisure;
At work.

At home, no one is immune to electric shock.

Some domestic accidents do not cause injuries, when the discharge, although very unpleasant, is caused by a single-phase current of low intensity. However, more serious accidents can be caused by:

An electrical device with bare wires that is plugged into an outlet;
An installation in poor condition and not in accordance with electrical standards;
An obsolete or damaged electrical outlet;
A broken switch;
An unsecured electrical circuit without a differential circuit breaker.

All of this can be avoided by ensuring that the installation meets current standards.

There is also a risk of electric shock outside the house. Incidents can be caused by electric arcs, particularly lightning. Among the activities at risk, we can mention:

Fish with a rod when the weather is stormy;
Sailing when it’s stormy;
Practice parachuting and any other aerial activity when the sky is threatening;
Practice an activity near electricity pylons.

In general, touching an accessory with a metal structure (umbrella or other) can lead to electric shock, especially when there is a thunderstorm.

You should know that proximity to a high voltage source can be the cause of an electric shock, even an electrocution, even if there is no contact. Indeed, electric arcs can then cause thermal radiation which leads to burns. This is explained by the high conductivity of the human body, which is higher than that of air. In the event of an electric arc, the current flows naturally to the best conductor, here the body.

These accidents are mainly due to non-compliance. Insufficient knowledge, haste, distraction, ignorance of the condition of a facility, incompetence or the use of unsuitable tools can also be the cause. In general, trades related to electricity (production, distribution, repair, etc.) are secure in order to avoid electrification. Other sectors of activity are more affected, such as those working near power lines, such as tree pruning, for example. People working on roofs (roofers, etc.) are also concerned, and must therefore take all their precautions.

Why when you touch electricity can it electrocute?

By accidentally touching the electrified fences at the edge of the fields, a bare electric cable (which has lost part of its sheath), or by putting your fingers in a socket … there are many ways to be electrified, that’s that is to say to be crossed by an electric current. Not to be confused with electrocution, which we only talk about if the electric current passing through the body causes death. If electrification causes lesions or even injuries, death occurs very rarely.

Electricity is a charge carrier

Electricity is the transport of charged particles. The atoms that make up matter are formed from a positively charged nucleus around which electrons, negatively charged elementary particles, orbit. In a so-called “conductive” material, the electrons of its atoms are free to move, while in a so-called “insulating” material, these electrons are stuck with their respective atoms, and do not move. When a difference in electric potential, called electric voltage and expressed in volts (V), is applied from one end of a conductor to the other, the electrons will start to move under the effect of the electromotive force, attracted to the positively charged side. They then create what is called an electric current.

From the power stations which create electricity to the electrical outlets of the houses, it is a whole distribution network which ensures the transport of electricity, by high voltage lines in particular, but also by the “invisible” network, hidden in the walls of houses, electric wires running through the houses. “Don’t put your fingers in the socket!” regularly hear and will hear many children. Within the electrical outlets are two sides: one side named “phase” which has a potential of 230 volts, one side named “neutral” which does not have any electrical potential. If, by mistake, we find ourselves touching the phase side, we are on the one hand connected to a high potential by contact with the socket, on the other hand connected to a zero potential called earth, that is to say – say the ground. When the contact time is very short, for example in the case of the fingers in the socket which are instantly withdrawn, the feeling will only be a very unpleasant tingling sensation, this is called “taking a chestnut”. But in the case of prolonged contact with a current, this potential difference between the feet and the fingers will allow the current to flow from the socket to the earth, through the human body.

Human body is a good conductor of electricity

Because among the best conductors are metals, water, and therefore … the human body. Indeed, the latter being mainly constituted by water, the electric current can circulate there easily, by the vascular and nervous systems, but also by the skin which is all the more conductive when it is wet. Whether the discharge comes from lightning, a socket or an electric fence, there will always be an entry point, where there was contact with the high potential source, and an exit point, where current will pass from the body to another element with zero potential, whether it is the ground or the neutral side of an outlet, for example. The current will seek to minimize its path, so will take the shortest path to reach the exit.

Electrification can lead to numerous injuries which depend on the intensity of the current, the contact zone, but also the entry and exit points, which determine its trajectory and its duration. Often the hand serves as an entry point, and the foot as an exit. By passing in contact with the skin, the first barrier to its passage, electricity generates more or less severe burns, ranging from simple redness to a 3rd degree burn. It then spreads in the least resistant parts, always seeking to minimize its path. Nerve fibers and blood vessels are the preferred places of passage, but the path can extend to the muscles, causing involuntary contractions. In case of very strong intensity, the current can go to the heart and cause cardiac dysfunction, ranging from simple disturbance to complete stop.