Poseidon is one of the most famous Greek gods. Brother of Zeus, he is often represented with his trident. He is the god of the sea, but also dominates earthquakes and horses. Many myths and legends are attached to this character from Greek mythology. CleverlySmart tells you more about it.

He is also considered the god of earthquakes and a navigator. It corresponds to the god adopted into Roman mythology as the god Neptune, who is behind him.

Poseidon is the son of Cronos and Rhea, just like his brother Zeus. After the victory of Zeus and his brothers against the Titans, Poseidon, by lot, took the kingdom of the sea. He held in his hands a trident with which he ruled the seas and oceans.

According to the tradition of the Homeric sagas, Poseidon was under the sovereignty of his older brother Zeus and each time he tried to oppose him, in the end he gave in and ended up obeying him.

The god of the sea and water

With a single gesture, he could cause terrible storms, deluges, thunderstorms and earthquakes. But he could also instantly calm the waves, create islands and soften the winds. In addition, he was able to gather the rain-laden clouds and pour down the waters of heaven to the earth.

He traveled over the sea in a golden chariot drawn by four white horses. The waves receded as the god Poseidon passed, while all around, dolphins and sea swallows flew above the water and accompanied him on his journey.

More broadly, he was also the god of the rivers that make the land fertile and the god of fountains.

Finally Poseidon, like Nereus, was the god of navigation, the one who calms the fury of the waves. As such, he is often represented accompanied by a dolphin.

Moreover, in Greece, when the sea is calm, a little before sunset, it is not impossible to see dolphins, rising above the waves and accompanying the boats. The presence of dolphins carries a message and a promise of good weather.

During the Titanomachy (fight against the Titans), which he led with his brother and the other gods, it was he who closed the brazen gates of Tartarus (hell) on the titans. Following this victory, the Gods shared the world. He obtains sovereignty over the seas and oceans.

God of earthquakes and earths somehow

It is capable of triggering quite large earthquakes. So much so that Hades would be afraid that he would collapse the vault of hell. He has nicknames such as gaièoklos “the one who kisses the earth” or d’énosikhthon, “the one who shakes the earth”. In the Giant Wars, he split the mountains and rolled them into the sea to form the first islands.

Poseidon regularly disputes lands with the other Gods and triggers natural disasters if he does not get what he wants:

He flooded Attica following his defeat against his niece Athena who obtained this city after having offered an olive tree to the city while Poseidon had offered a source of salt water.
He tried to take Argolida from Arena but the judges to whom Zeus submitted him had a judgment in favor of Arena. In anger, Poseidon dried up the rivers of his judges.
Two examples among many others that show the explosive character of this God. 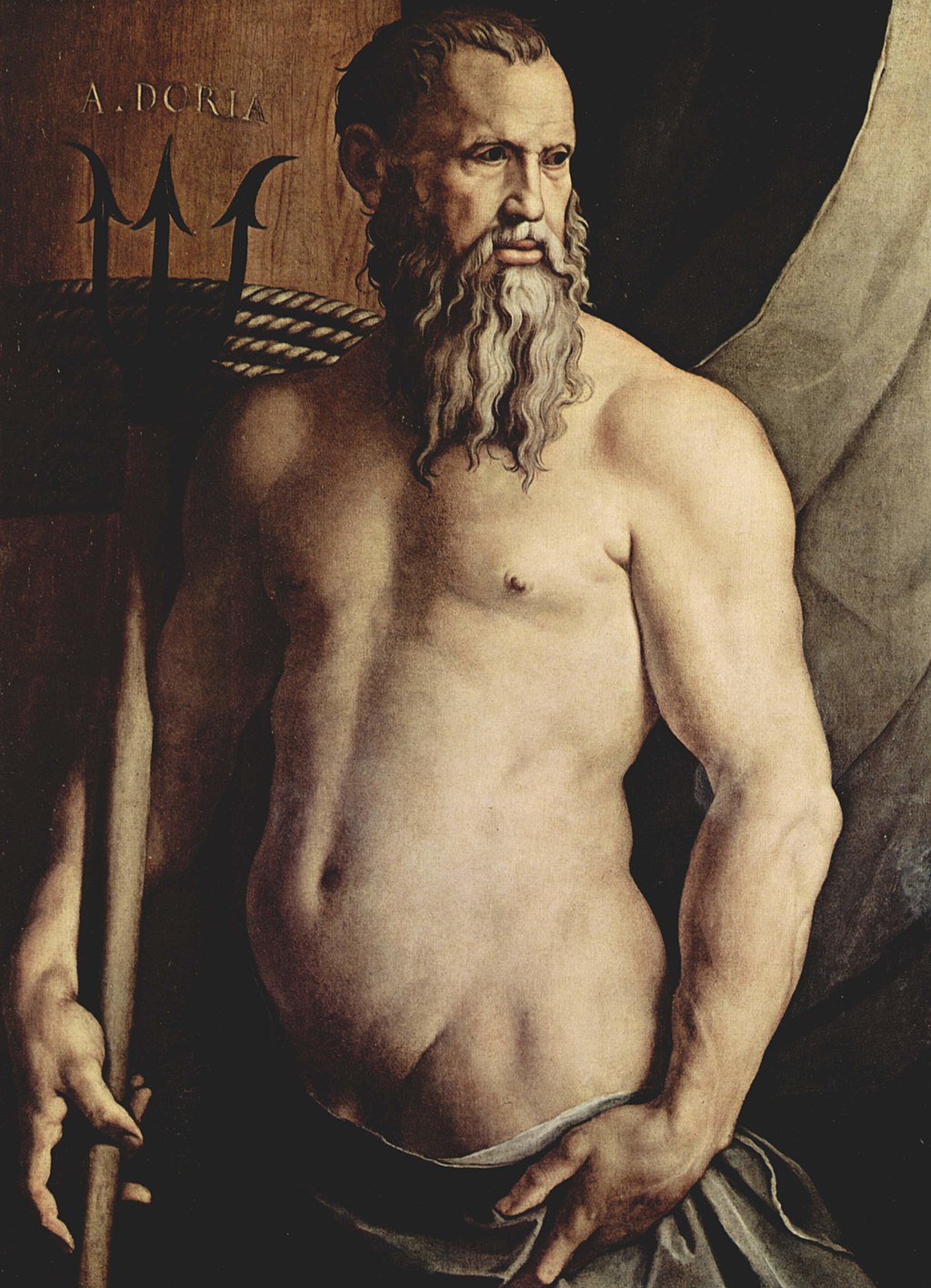 Andrea Doria as Neptun by Angelo Bronzino, (1503 – 1572) was a Florentine painter and one of the greatest portraitists of the 16th century and an outstanding exponent of Mannerism in religious art. He was court painter to Cosimo di Medici. Bronzino, Public domain, via Wikimedia Commons

Son of Cronos and Rhea, Poseidon shared the fate of his brothers and was, from birth, swallowed by his father, who had to bring him back to light through the effect of the drink that Zeus administered to him on the advice of Metis.

According to other authors, Rhea managed to save Poseidon from his father’s voracity, she gave him a young colt to eat, and she hid her son in the middle of a herd of lambs, near Mantinea; entrusted to a nurse named Arné, Poseidon grows up without his father’s knowledge.

It was also said that the young god had been handed over by his mother to Capheira, daughter of Oceanos who raised him in Rhodes with the help of the Telchines.

When Zeus fought the Titans and the Giants, Poseidon sided with him and for his part killed the giant Polybotes, by throwing at him a fragment of rock detached from the island of Cos and which later became the islet of Nisyros.

After the common victory, the paternal inheritance was divided into three lots:

Equal to Zeus by birth and dignity, Poseidon was nonetheless subject to the sovereign power of his brother. The god of the sea sometimes moaned and was irritated by it, and he even dared one day to conspire with Hera and Athena to dethrone Zeus; but this one was the strongest, and Poseidon had to expiate his attempt at revolt by going to serve the proud Laomedon for a year, and to build the ramparts of Troy.

His empire, however, had enough to satisfy his ambition. Master of the sea, Poseidon still had lakes and rivers under his control; the earth itself belonged to him in some way, since he supported it on its waters and could shake it according to his fancy.

Hadn’t we seen him, during the war of the Giants, splitting the mountains with his trident and rolling them into the sea, to form the first islands? Was it not he again who, at the time when Thessaly was only an immense lake, had, by splitting the Ossa massif in two, cleared a road to Peneus?

He boasts of having created the horse, but it is said that when he was still a newborn Rhea gave one to Cronus to eat. He also claims the invention of the bridle, although Athena had already invented it before him; but it is not disputed that he instituted horse-racing. In his vast stables, he had for his chariots, white horses with golden manes and brazen hooves, as well as a golden chariot which instantly calms the storms. In any case the horses are devoted to him, perhaps because of his amorous pursuit of Demeter.

As he was gruff and quarrelsome, he preferred to build his palace at the bottom of the sea off Aegean in Euboea (or Helike). 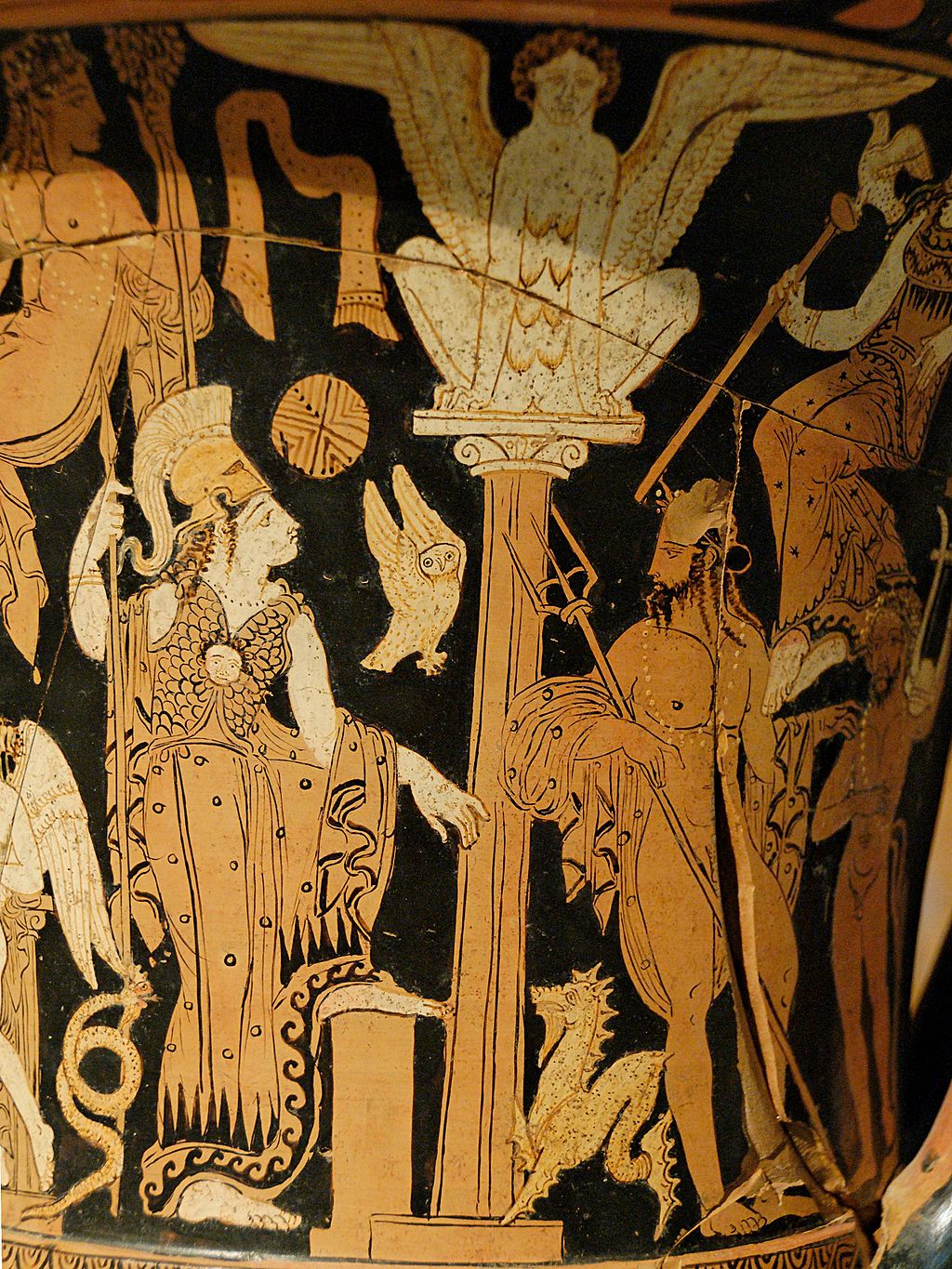 Poseidon is most often depicted in ancient Greek art as mature and bearded. He often wielded his trident, fashioned by the Cyclopes, with which he created earthquakes by striking it on the ground. He is also often depicted astride his golden chariot drawn by seahorses – creatures half horse and half fish-tailed serpent – or horses with golden hooves, of which he was the patron.

Dolphins, seahorses, and tunas are other sea animals frequently seen accompanying the god on artwork.

The god appears with Athena in their competition to become patron of Athens on the west pediment of the Parthenon (447-432 BCE). Poseidon appeared on coins, perhaps the most notable being the silver tetradrachms of ancient Macedonia (306-283 BCE) where he appears to be about to throw his trident.

Perhaps the most famous depiction of Poseidon is the 2-meter-tall bronze statue (c. 460 BCE) at Cape Artemision (although such is the similarity in the depiction of Poseidon and Zeus in ancient Greek art , it may well represent the latter). The statue was salvaged from a wreck in the 1920s, and this magnificent walking figure now dominates one of the halls of the Archaeological Museum of Athens.

Photo description:  Statue of Poseidon with Parian marble. Found on Milos, a volcanic Greek island in the Aegean Sea, just north of the Sea of Crete. This statue is larger than life-size statue depicts the God almost nude, wearing a himation covering only the lower part of his body. In his raised right hand, he will have held the trident. Next to his right leg is a support in the form of a dolphin. 125-100BC. Photo taken by www.PinterPandai.com in National Archaeological Museum, Athens, Greece.

Secrets and History of the Acropolis Museum in Athens, Greece Housing Ancient Treasures