Ngurah Rai (30 January 1917 – 20 November 1946) was a lieutenant colonel in the Indonesian Armed Forces fighting for independence against the Dutch Army.

Under his command, Balinese forces engaged in the struggle for independence against the Dutch until a battle ensued in which his force was outnumbered from the start. The ritual self-sacrifice in a fight in a hopeless situation (Indonesian puputan ) is based on an old tradition. Along with him, 1371 combatants died in this battle of Marga .

He was born in the Desa of Carangsari, Kabupaten Badung in Bali on January 30, 1917. He studied at the Dutch elementary school and then at the college in Malang, East Java. Then he went to Dutch military training at the Cadet Military School in Gianyar, Bali and Magelang, Central Java. After graduating, he joined the Dutch army as a second lieutenant in Bali.

The political division of the Balinese kingdoms during the Indonesian Revolution (1945-49)
After the proclamation of the independence of Indonesia, he created the People’s Security Army, precursor of the Indonesian Armed Forces for the small islands of the Sunda. He then left for Yogyakarta, capital of the Republic, to receive orders before returning to Bali to oppose about 2,000 Dutch soldiers who had landed on March 2 and 3, 1946.

Ngurah Rai finds divided Republican forces and sets out to bring them together. He then organized the first attack against the headquarters of the Dutch forces at Tabanan. The Dutch seek to locate Ngurah Rai’s base and offer negotiations, which he refuses.

On November 20, 1946, the Dutch launched a major attack on Marga with the help of Lombok troops and air support. Lieutenant-Colonel Ngurah Rai orders a puputan (fight to the death) in which he dies with all his soldiers3,1. The battle is known as the Battle of Margarana. 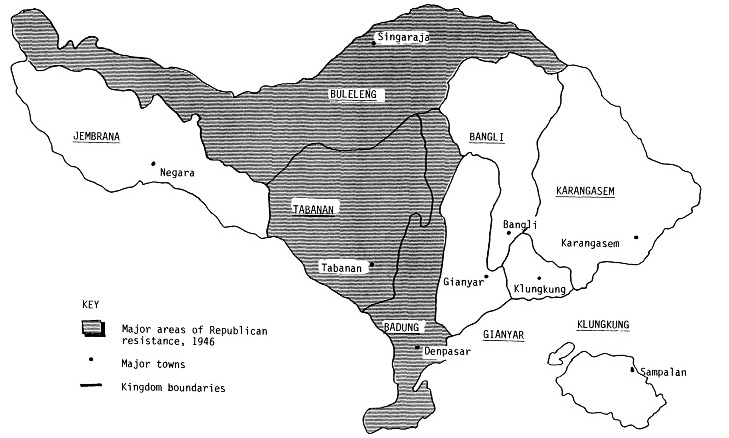 The political divisions among kingdoms of Bali during the Indonesian National Revolution (1945-46). I Gusti Gde Raka, Public domain, via Wikimedia Commons

Ngurah Rai is buried in Marga. On August 9, 1975, he was declared a national hero by Presidential Decision No. 063/TK/TH 19751. His name is given at Denpasar International Airport, Bali and it appears on IDR 50,000 banknotes.